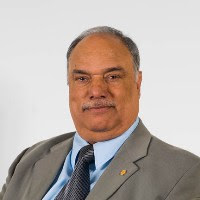 The lobby were in for a huge surprise at this morning's Tory briefing.

The entire Tory group (led by Nick Bourne and Cheryl Gillan) packed out the media room too announce that Plaid Cymru AM Mohammad Asghar would be joining their group for the remainder of the Assembly.

He says his feelings jar more and more with his Plaid party who selected him as a list member for the 2007 Assembly Election in South East Wales...

Expect a day of high drama in Cardiff Bay...

ADD: Believe it or not even though Mohammad Asghar is a list member for Plaid Cymru in South East Wales he is allowed to switch parties.

Once a member is elected, he or she is elected but if he was to stand down Plaid would be allowed to nominate the successor to that seat.

On an interesting note, apparently Nick Ramsey was spotted moving out of his office late last night possibly to make way for their party’s latest addition...

Thank god. Both him and his daughter are extremely opportunistic individuals. His attitude towards women is quite appalling and his politics is wishy-washy to say the least. Natasha was a no-show in supporting the party at the European elections campaign despite being a candidate.

He was elected to represent a portion of society, and has proved that his personal gains come before fulfilling the duty that was bestowed upon him and entrusted to him.

In 2 years he will be history, he never was elected personally, neither will he be in Wales. I just feel sorry for the proportion of society that will not be represented now despite coming in with the duty of proportional representation. Simply a man unable to do a job. And having had his election costs covered by Plaid and its supporters, a biter of the hand that fed him.

Stand down Oscar. Please, so that we can be represented as democratically expressed. Wales is not your plaything, we don't want you, we never did.