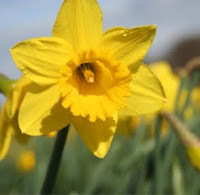 Darren Millar and Mark Isherwood have declared their shock in today’s Daily Post at the level of WAG spending on flora and fungi.
Over the past five years £175,000 has been spent looking after various shrubbery in WAG buildings – which, according to the two Conservatives, is far too much. Mr Isherwood *cleverly* uses gardening puns to get his message across.
“This Welsh Assembly Government must take a leaf out of the book of good financial husbandry and root out the deep waste in its own back garden.”
So just how much should an institution the size of the Assembly spend on its perennials? Would there not be outrage if guests and workers at WAG buildings were greeted by the sight of dead and dying daffodils? Don’t our AMs have better ideas how to save some cash?
Permenant secretary Gillian Morgan responded to Mr Millar and Isherwood by saying:
“Whilst plants have been used to improve the public and working environments in buildings with very low levels of natural light, these costs are currently under review given the current financial and economic situation.”
Interestingly £175,000 over 5 years is less than the cost of an AM for the same period – some may argue that the flowers are a better use of public money....
Dewi Un
P.S Here’s a good site for some green fingered cash saving tips – maybe the WAG should take note?