Nerys Going For It All 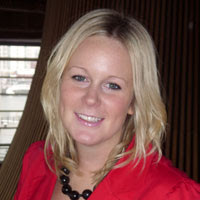 Nerys Evans, the Plaid Cymru AM for Mid and West Wales, announced earlier that she hopes to change seats. The 30 year old who has sat in the Assembly since 2007 said on Twitter that she’s put her name forward for nomination in the Carmarthen West and South Pembrokeshire seat .
“have put my name forward for the #plaidcymru nomination for Carms West and South Pembs for the Assembly election.”
This isn’t the first high profile potential constituency swap at the next Assembly election – remember that attack by Alun Davies on Blaenau Gwent AM Trish Law? Its over a year now since he announced his intention to run for her seat. Interestingly 50% of the Mid and West Wales regional AMs are now contesting other seats in the 2011 election. I wonder if there’s something in the water...
This isn’t the start of a mass exodus of regional AMs challenging for constituency seats – Peter Black has already ruled out standing in Swansea West for example. But it may be an indication that AMs who are looking to climb the party ladder feel that being a constituency AM gives them more legitimacy.
So what are Nerys Evans’ chances in Carms West and South Pembs? Well in the last two Assembly elections Plaid Cymru have not been that far behind there. In 2007 Angela Burns won the seat with only 250 more votes than Plaid Cymru’s John Dixon. But Plaid Cymru came third. With the 2007 vote being such a close race - two parties on 29% and one on 30% - anything is possible.
Angela Burns should still feel quite confident however given that the Conservatives had a 9.8% swing to them in Carmarthen West last time around. It makes even better reading for the Conservatives if you look at the Westminster election results there. Plaid Cymru nowhere near the top spot – fighting it out with the Lib Dems for third place.
So why take the risk? As the top name on Plaid's Mid and West list Nerys Evans is pretty much guaranteed to hold onto her seat in 2011. If Nerys Evans was moving to a safe Plaid constituency you could understand – but Carmarthen West? Am I perhaps being too cynical about politics? Could it be that as a local girl Nerys Evans just wants to fight for the chance to represent her local area?
Whatever the rationale behind it this is a big gamble by Nerys Evans. If it pays off it may give her more credibility as she moves up the Plaid ranks. But if it doesn’t - one of Plaid Cymru’s rising stars will be out in the cold this time next year.
Dewi Un

P.S Nerys Evans has yet to win the nomination –she has simply put herself forward.

I can never understand it when commentators who should know better keep repeating similar lines to the one quoted above.

Plaid Cymru is a democratic party, and as such the selection of its candidates lies with its members.

Plaid members in mid and west will select their candidates, in order 1-4 sometime in late summer after a process of campaigning on behalf of the prosbective candidates and hustings.

There is no name therefore on the list, let alone a top name.

Now don't get me wrong, I don't doubt for a second that the members might well have selected Nerys as their prefered #1, after all she's been a hard working, effective, and intelligent AM for the last 3 years; but that doesn't mean that she will automatically be #1 candidate this time around. Unlike the Tories, might I add.

Also, as was said earlier, it is not certain that Plaid will win a list seat in Mid and West if the party does well (really well) in the constituencies.

Is it not a sign of her confidence? Confidence in herself and in the party's 2011 campaign?

Go for it Nerys!

I'm sorry you're being VERY pedantic! Of course Nerys Evans is top of your list - And I don't care when you lot actually pick.

And yes she would have automatically been your top name.

There's hardly a fountain of talent for Plaid in the Mid West (Just look at Penri James).

So don't try and kid yourselves that the Mid West party faithfull holds the power - like every other party your dictated to by party HQ and cricumstance.

Maybe if Plaid had spent more time concentrating on campaigning and not worrying about little issues of adminsitration they might have done better in the region in May.

And it's not a bad thing that we 'tories' are more decisive in picking names - it offers more clarity and certainty - unlike your situation in the Mid West now.

Who would fail in 2011? Labour favourates at preasant. But a lot can happen between now and 2011.

No Nerys has done the right choice. Her destiny will be in her own hands, rather than relaying on the complexity of list top up system just think of Glyn Davies in 2007.

Her main office is in her chosen seat, she was born and bread there, it is the right decision.

ops, she has to win the nomination first, dim problem

So is Penri James going to go for the Mid and West list?
That is what a freind told me.
Does anyone think he'll get to the top (Realistically the only person who will get elected)?

If Plaid does better than last time? No one from the list will be elected,as Nerys will have won.

If Plaid does as well as last time? One from the list will be elected.

If Plaid does not as good as last time? None will be elected from the list.

But if Plaid does very much worse than last time? One or two could be elected from the list.

What a lively voting system?

Given the big names now showing an interest in this Plaid list, it might be quite an acheivment to get in to the top 4 on the list.

Hope that through the network to help more health or economic needs a friend
Easy on the method used to help alleviate their financial burden while allowing family members restore their health,
Through the Internet at home, you can easily understand the cause ...
Free registry experience:
http://sn.im/vemma_usa
Thank you for your time reading, do not give up the chance to even know, know no loss to you!

Online cash loans are for anyone who needs to borrow funds and is not limited depending on credit. If you have bad credit there are online cash loans that will fit your needs but anyone can apply online including those with shining credit. click Here

SMARTS - that's the name of today's online income affiliate game. You already have "smarts?" Good, that gives you a head start. Yet, the catch is, knowing exactly when, how, where, and what strategies to implement with the God-given smarts you possess. Many a well-intended online income affiliate has landed on the side-shores of this vast Internet sea
click here

This is my first time i visit here. I found so many interesting stuff in your blog especially its discussion. From the tons of comments on your articles, I guess I am not the only one having all the enjoyment here! keep up the good work.

Earning money online never been this easy and transparent. You would find great tips on how to make that dream amount every month. So go ahead and click here for more details and open floodgates to your online income. All the best.

Earning money online never been this easy and transparent. You would find great tips on how to make that dream amount every month. So go ahead and click here for more details and open floodgates to your online income.

God this spam is getting everwhere