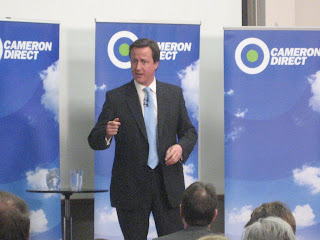 I have just returned from an evening with the Conservatives (and Dewi Tri) so I thought I'd give you my thoughts on the night.
First thing's first, Barry Comprehensive must be congratulated for their good spread of cakes.
Secondly, please read and listen to the post that Dewi Tri has just put up regarding the Tories' confused position on further law making powers for Wales, I think you’ll find it interesting.
What struck me primarily was how little David Cameron had to sweat tonight, not once was he moved out of his comfort zone. He gave a smooth polished performance but was on autopilot for the duration. I’m not suggesting that the crowd wasn’t authentic, I was there and it felt pretty authentic to me, one gentleman even walked out following a response by DC on St Athan. However I did feel as if the room was largely full of Tory sympathisers which as Nick Robinson explains is understandable.
Having now seen him ‘up close and personal’ I understand why the comparison with a car salesman makes so much sense. Cameron is affable on stage, engages well with his audience and has the ability to improvise to the spot. Obviously here in lies his success, as has been much written about and comparisons with a young Tony Blair made. What Cameron’s charisma does is soften the Conservatives' message making it palatable to the public.
But seeing him up close and personal also exposes his weaknesses. Every answer today reverted to the bigger picture, and rarely were concrete policies discussed at length, some were alluded to but no effort was made to show a ‘real’ Tory policy and show how it would impact upon the local people. I doubt it's because Cameron is too lightweight to handle the questions but rather a policy of the political machine behind him. His performance tonight, although substance-light, could easily have won over the few floating voters that were there, purely because of the skill of his delivery and style.
Tonight’s festivities reminded me heavily of the American political scene. The style and approach was very much like a primary caucus and very direct. It showed off the more modern approach of the Tories, and their slick backroom staff.
Will Cameron be the man to unlock Wales for the Conservatives? Well after tonight I think that they will make some gains at the next election, but not nearly enough to challenge the overall majority of Labour seats here.
Let me know your thoughts,
Dewi Un